This is the true story of a Marine wounded in Korea in 1950. Writing to his mother, he told her of a fascinating encounter he experienced in the war. Father Walter Muldy, a navy chaplain who spoke to the young Marine and his mother as well as to the outfit commander, always affirmed the veracity of this narrative. 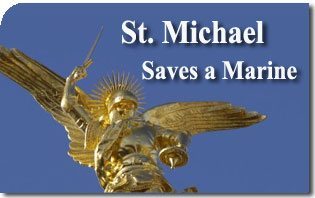 We heard it from someone who read the original letter and retell the story here in all its details and in the first person to better convey some of the impact it must have had when first told by the son to his mother.

I am writing to you from a hospital bed. Don’t worry, Mom, I am okay. I was wounded, but the doctor says that I will be up in no time.

You remember the prayer to Saint Michael that you taught me to pray when I was little: “Michael, Michael of the morning…” Before I left home for Korea, you urged me to remember this prayer before any confrontation with the enemy. But you really didn’t have to remind me, Mom. I have always prayed it, and when I got to Korea, I sometimes said it a couple of times a day while marching or resting. 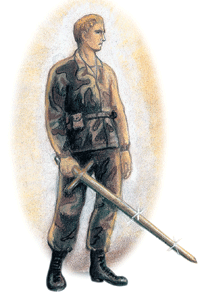 Well, one day, we were told to move forward to scout for Commies. It was a really cold day. As I was walking along, I perceived another fellow walking beside me, and I looked to see who it was.

He was a big fellow, a Marine about 6’4” and built proportionally. Funny, but I didn’t know him, and I thought I knew everyone in my unit. I was glad to have the company and broke the silence between us:

“Chilly today, isn’t it?” Then I chuckled because suddenly it seemed absurd to talk about the weather when we were advancing to meet the enemy. He chuckled too, softly.

“I thought I knew everyone in my outfit,” I continued, “but I have never seen you before.”

“I know,” the Marine said, “Michael, Michael of the morning….”

Mom, I was really surprised that he knew about my prayer, but I had taught it to many of the other guys, so I supposed that the newcomer must have picked it up from someone else. As a matter of fact, it had gotten around to the extent that some of the fellows were calling me “Saint Michael.”

Then, out of the blue, Michael said, “There’s going to be trouble ahead.”

I wondered how he could know that. I was breathing hard from the march, and my breath hit the cold air like dense clouds of fog. Michael seemed to be in top shape because I couldn’t see his breath at all. Just then, it started to snow heavily, and soon it was so dense I could no longer hear or see the rest of my outfit. I got a little scared and yelled, “Michael!” Then I felt his strong hand on my shoulder and heard his voice in my ear, “It’s going to clear up soon.”

It did clear up, suddenly. And then, just a short distance ahead of us, like so many dreadful realities, were seven Commies, looking rather comical in their funny hats. But there was nothing funny about them now; their guns were steady and pointed straight in our direction.

“Down, Michael!!” I yelled as I dove for cover. Even as I was hitting the ground, I looked up and saw Michael still standing, as if paralyzed by fear, or so I thought at the time. Bullets were spurting all over the place, and Mom, there was no way those Commies could have missed at that short distance. I jumped up to pull him down, and then I was hit. The pain was like a hot fire in my chest, and as I fell, my head swooned and I remember thinking, “I must be dying…” Someone was laying me down, strong arms were holding me and laying me gently on the snow. Through the daze, I opened my eyes, and the sun seemed to blaze in my eyes. Michael was standing still, and there was a terrible splendour in his face. Suddenly, he seemed to grow, like the sun, the splendour increasing intensely around him like the wings of an angel. As I slipped into unconsciousness, I saw that Michael held a sword in his hand, and it flashed like a million lights.

Later on, when I woke up, the rest of the guys came to see me with the sergeant. 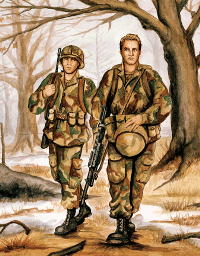 “Where’s Michael?” I asked in reply.

“Michael who?” The sergeant seemed puzzled.

“Michael, the big Marine walking with me, right up to the last moment. I saw him there as I fell.”

“Son,” the sergeant said gravely, “you’re the only Michael in my unit. I hand-picked all you fellows, and there’s only one Michael. You. And son, you weren’t walking with anyone. I was watching you because you were too far off from us, and I was worried.

It was the second time he had asked me that, and I found it irritating.

“How did you kill those seven Commies? There wasn’t a single bullet fired from your rifle.”

“Come on, son. They were strewn all around you, each one killed by a sword stroke.”

And that, Mom, is the end of my story. It may have been the pain, or the blazing sun, or the chilling cold. I don’t know, Mom, but there is one thing I am sure about. It happened.

PrevPreviousMary, Mother of Jesus – Catholic comment on a Protestant look at Mary
NextWhat is Self-Managing Socialism?Next