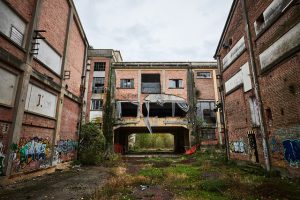 As the debate rages over stay-at-home orders during the coronavirus pandemic, most conservative opposition has focused on the damage to the economy, excessive government surveillance, or the massive increase in government debt. These are very valid and important concerns.

But the coronavirus’s most enduring damage will not be a lower GDP, higher debt, or even lost jobs. The shutdown is a valuable opportunity for radical greens to impose what they have been dreaming about for decades: permanent “de-development.”

For radical greens, the final goal of environmentalism is not to eliminate pollution, build solar panels, or reduce carbon dioxide emissions. The real cause of our ecological “crisis” is Western Christian civilization. It produced our hierarchical relationship with the natural world and our free-market economy based on private property. Our environmental problems, therefore, are not economic or social or political, but “civilizational.” As Greta Thunberg has said, to fight climate change, we need “system change.”1

“The climate justice fight in the U.S. and around the world is not just a fight against the [biggest] ecological crisis of all time,” explains Miya Yoshitani, executive director of the Asian Pacific Environmental Network. “It is a fight for a new economy, a new energy system, a new democracy, a new relationship to the planet and to each other…We are bound together in this battle, not just for a reduction in the parts per million of CO2, but to transform our economies and rebuild a world that we want today.”2 (emphasis added)

The solution they propose is called “de-development” – the dismantling of our modern economy based on profit and private property. In their 1973 book Human Ecology: Problems & Solutions, John Holdren and Paul Ehrlich explain:

A massive campaign must be launched to restore a high-quality environment in North America and to de-develop the United States. De-development means bringing our economic system (especially patterns of consumption) into line with the realities of ecology and the global resource situation…The need for de-development presents our economists with a major challenge. They must design a stable, low-consumption economy in which there is a much more equitable distribution of wealth than in the present one. Redistribution of wealth both within and among nations is absolutely essential, if a decent life is to be provided for every human being.”3

Yvo de Boer, who held the top climate position at the United Nations until 2009, remarked that “the only way [we] can achieve a 2-degree [temperature reduction] goal is to shut down the whole global economy.” Kevin Anderson and Alice Bows-Larkin of the Tyndal Centre for Climate Change Research in the U.K. and two of Britain’s top climate change activists stated that emissions cuts of 10% or so – as advocated by many environmental groups – are not nearly enough. We must implement “radical and immediate de-growth strategies in the U.S., E.U., and other wealthy nations.”4

When the United Nations published its new “Sustainable Development Goals” in 2015, many radical greens attacked it for not going far enough. Speaking for many, anthropologist Jason Hickel of the London School of Economics affirmed that “growth isn’t an option any more.” The real cause of our environmental crisis is not pollution per se, but the Western model of economic growth based on private property, profit, and free-enterprise.

“What does this mean for our theory of development? …instead of pushing poorer countries to “catch up” with rich ones, we should be thinking of ways to get rich countries to “catch down” to more appropriate levels of development. We should look at societies where people live long and happy lives at relatively low levels of income and consumption…as exemplars of efficient living.”5

The peoples of the Western world need to dismantle their economies and live poorer, more communitarian, and more “sustainable” lifestyles. They must sacrifice their cheap, abundant energy and a free-enterprise economy to save planet Earth. Not surprisingly, Hickel’s model country is Communist Cuba, which he regards “not as underdeveloped, but rather as appropriately developed.” Poverty in Communist regimes is a feature, not a bug.

And make no mistake: they are doing everything in their power to bring that poverty to the West. In February 2019, Democrats in Congress launched the Green New Deal, the most radical green manifesto in decades. Among other things, it seeks to end modern agriculture, phase out hydrocarbon-based energy, and implement a massive state takeover of the economy. Such policies would make food and energy far more expensive, destroy tens of millions of jobs, and “de-develop” the United States.

Naturally, such radical plans have met with severe pushback. For many years now, the green agenda has struggled to win over public opinion. President Trump’s 2017 withdrawal from the Paris Climate Agreement, a move widely supported by Americans, dealt the green movement a crushing defeat. In Europe, the gilets jaunes (yellow vests) protest movement erupted, in part as a reaction to fuel taxes imposed by the French government to fulfill its commitments to the Paris Agreement.

Attempts to curtail agriculture have also failed. In May 2019, a court decision in the Netherlands – the second-largest agricultural exporter in the world – ruled that the country was out of compliance with European Union rules for nitrogen emissions. When the Dutch government tried to force farmers to reduce production in October, protests erupted. Tens of thousands of Dutch farmers drove their tractors into The Hague and other cities, causing massive traffic jams. Polls show that three-fourths of the Dutch population supports the farmers.6

Or consider last year’s Global Climate Strike. In the lead up to the U.N.’s COP-25 environmental summit in Chile, green activists organised hundreds of climate marches around the world. Thousands of activists marched in a giant “Climate Strike” to push a global Green New Deal.

Greta Thunberg, the star of the global green movement, gave a hysterical, apocalyptic speech at the U.N.’s Climate Action Summit in New York. “The eyes of all future generations are upon you,” she shouted. “If you choose to fail us, I say we will never forgive you. We will not let you get away with this. Right here, right now, is where we draw the line.” It was a primal scream for climate action, yet public support for radical green policies barely budged.

Greens activists are frustrated that they cannot push their agenda forward. Most Americans and Europeans simply do not believe that global warming is a threat that requires such radical measures as the Green New Deal. Many others see environmentalism for what it is: a vehicle for communism. Until a few months ago, the outlook for the radical green agenda was grim.

Coronavirus and the subsequent government lockdowns have changed the whole equation. Radical greens are seeing it as the best chance to impose their policies on an unwilling public and break through the impasse. Commenting on the pandemic, Rahm Emmanuel, former Chief-of-Staff under President Obama, was so bold as to reprise his famous phrase from the 2008 financial crisis:

Astrophysicist Martín Lopez Corredoira wrote that “neither Greenpeace, nor Greta Thunberg, nor any other individual or collective organisation have achieved so much in favour of the health of the planet in such a short time…It is certainly not very good for the economy in general, but it is fantastic for the environment.”

Oxford University professor Peter Frankopan wrote in The Times of London that the beneficiary of the coronavirus “will be the climate: after all, the world’s lungs are already breathing more easily thanks to the collapse of industrial production. Who is to say that this pandemic does not provide a turning point in world history.”

In an editorial, the Manchester Guardian wrote that the “mass shutdowns we now experience – likely necessary in a pandemic – could provide a model for imposing harsh actions to curb carbon emissions that activists consider as great or greater threats than the virus itself.”

Pope Francis, arguably the most influential world leader, sees the pandemic as an opportunity to implement the anti-development ideas contained in his encyclical Laudato Si’. Coronavirus, he said, is nature “having a fit” over man-made environmental damage.9 The shutdowns are an opportunity to “slow down our rate of production and consumption” and “to move from using and misusing nature to contemplating it.”10

Vatican News published (then quickly deleted) an article by Fr. Benedict Mayaki, S.J. titled “Coronavirus: Earth’s unlikely ally,” in which he claimed that “the changes in human behaviour due to the COVID-19 virus pandemic are yielding unintended benefits to the planet…Earth is healing itself”11 Leonardo Boff, the Brazilian liberation theologian and co-author of Laudato Si‘, wrote in a blog post that the coronavirus is a “retaliation of Gaia” for mankind’s “violence” against nature and the “profound inequality” in human society.12

Patriotic citizens have raised concerns about the excessive government shutdowns of the economy, the trillions of dollars in new bailouts, millions of lost jobs, the threat from Communist China, and especially the massive increase in government surveillance in the name of “public health.” These threats are very real, and we must oppose them. But these issues are a means to an end. The final goal is green “de-development” and the destruction of the Western Christian civilization. Just ask Greta.

PrevPreviousWarning! A Virus Threatens The Future of The West and Christian Civilization
NextAct of Reparation to The Sacred HeartNext