The Universe Is “Too Fine-Tuned for Chance”

An Interview of Francis Slobodnik of Crusade Magazine with Mr. John Calvert on Intelligent Design. 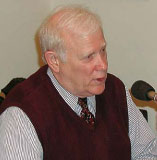 Mr. Calvert: I studied geology in college and received my first degree in 1962. Then I was in the Army for two years where I became interested in law. After leaving the Army, instead of going for a doctorate in geology, I opted for law. Then I worked with a large regional Midwestern law firm where my focus was on law relating to securities.

I was an agnostic and never questioned evolution until a few years after I became a Christian in 1978. In the early eighties, I came across an article about DNA and the genetic code. It blew me away because I discovered that the genetic code works almost like Morse code. The genetic code functions the same way, using four symbols instead of two, which are chemical components called nucleotide bases. It dawned on me that this genetic code, common to all living systems, could not be explained by a Darwinian mechanism but only by intelligence. I could not imagine how a mechanistic process alone could construct this code.

I began to study the evidence for design and natural phenomenon. I later found an article by a chemist who was critical of the scientific theories of origins. He wrote that when you look at biochemical systems you are inexorably led to an inference of design, which is precisely my thinking. However, he said, “Because I’m a scientist, I am not allowed to explore that hypothesis. It is off limits.” That really opened up my eyes. I thought, “He is disregarding the evidence because of its implications. He is using philosophy rather than science to derive his investigation.” Later I learned that this is an unwritten rule in science and many use it to avoid any discussion of design, or teleology—the study of design and purpose in nature. Design was being disallowed not because of the strength of evidence but because of a philosophy.

In 1999, someone handed me a draft copy of the “Kansas Science Standards.” The science community proposed that the government adopt a no-design materialistic philosophy. “Well,” I thought, “it is one thing for a scientist to embrace materialism, but quite another to ask the State to do it.” I went to the meeting and objected, but I do not think anyone understood my argument. The next person to speak was Dr. William Harris, a biochemist who made the same, yet more eloquent, argument. Jody Sjogren, a zoologist, also agreed with us.

We three later met to discuss our common interest. After looking over the drafts proposed by the science community, we prepared our own draft proposing changes that would be objective and not biased. One of our suggestions revising the definition of science so as to remove the materialistic bias was accepted. It was overlooked by the general public but not the science community. Subsequently, Bill, Jody and I decided to incorporate Intelligent Design Network as a non-profit organization to promote institutional objectivity in origins science.

Mr. Slobodnik: Could you describe the purpose and mission of Intelligent Design Network?

Mr. Calvert: It is a very narrow mission. Its focus is to seek institutional objectivity in origins science.

In football, you need two teams and a ball. You also need a set of rules and an impartial umpire. Likewise, in a scientific arena, we invite teams to develop competing ideas by using scientific method in a stimulating contest. The job of the institutions of science and public education is to be that impartial umpire. Our organization seeks this goal since origins science is subjective today. The set of rules has been revised so the preconception that only materialistic causes can explain where we come from is accepted. The umpire has been demoted to the position of security guard with the job to keep all ideas out of the stadium except those promoting materialistic worldviews. That is not objective, and therefore problematic.

Mr. Slobodnik: What element in Intelligent Design do you find most persuasive?

Mr. Calvert: The messages in DNA. Each cellular body has a message that is three billion characters long, a complexity recently described as indescribable. Is there a natural explanation to those messages? You find no physical or chemical law explaining that sequence. Any natural mechanism must resort to chance. The question is whether chance can explain those messages.

Chance is a real problem because its probability decreases exponentially as complexity increases. There is now interest in Intelligent Design because we are looking at cells, seeing this level of complexity and actually applying statistics to understand the probability of these things coming together by chance.

Along with biology, scientists are looking into the cosmos itself, finding that the laws regulating the operation of the universe cannot depend upon arbitrary quantities. The law of gravity, for example, can have any quantity, but for life to exist, its strength cannot be even a little bit off or we could not be here. Cosmologists have concluded that the universe is “too fine-tuned” for chance to explain that we have life.

Mr. Slobodnik: Why do supporters of Intelligent Design face such fierce persecution?

Mr. Calvert: Because the materialistic paradigm supports non-theistic beliefs that prefer not to have God intervening from time to time in the natural world. Furthermore, one of the primary non-theistic beliefs is secular humanism, which says that since natural selection and evolution can explain life quite adequately, there is no rational basis for belief in a Creator, which makes us simple occurrences lacking purpose and meaning. There is no purpose of life if we are mere products of a mechanistic cause. So, if science allows Intelligent Design into the equation, it will have a significant effect on religion, ethics, bioethics, government and so forth. That is why Intelligent Design is being suppressed.

Mr. Slobodnik: How does Intelligent Design relate to science and religion?

Mr. Calvert: Science is theoretical and religion is dogmatic. In religion, you cannot argue with certain tenets that are accepted by faith. In science, every explanation should be open to criticism and revision. Science is inherently sceptical—and it should be. For example, evolution’s contention that life is not a product of Intelligent Design should be open inherently to question.

Mr. Slobodnik: Why do neo-Darwinians not want to discuss the subject of Intelligent Design?

Francis Slobodnik of Crusade Magazine interviewed John H. Calvert, a lawyer and a managing director of Intelligent Design Network Inc. Mr Calvert has focused on constitutional requirements for teaching origins science in public schools, has been actively involved in the debate across the United States over the definition of science and the content of Science Education Standards, and has advised school boards, school administrators and science teachers regarding the teaching of origins science.